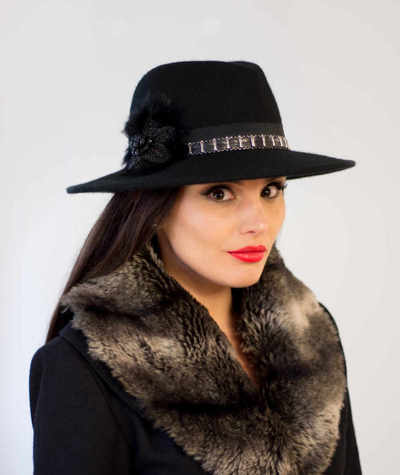 The women’s hat stores in Jerusalem can be divided in three major store types, and a fourth store type that stands alone.

There are men’s hats here too, also created by major international hat houses. That’s because the store services both men and women, and  has found that many women love the elegance of men’s fedora and trilby hats.

The clientele is varied; at any given time young people will be trying on the hipster hats produced by Goorin Brothers or Santana (of legendary fame), while women in their 30s and 40s will be checking out the Panama hats from both Borsalino and, for the first time, original SherlockS designs and colors. Older women love the protection the wide brim hats give, as well as the upscale hats that can be worn to synagogue and on holidays.

But service is key. Hat cleaning is available, as well as an assortment of feathers and hat bands. The two women (M&M) who tend the store are knowledgeable and know how to widen or tighten a hat so that it fits perfectly. After all, sometimes a person’s head is in-between a 7 and 7 1/2 inch fedora or just a tad larger than a 7 3/8 inch trilby. Actually, the motto of the store is: If The Hat Fits, It’s SherlockS.