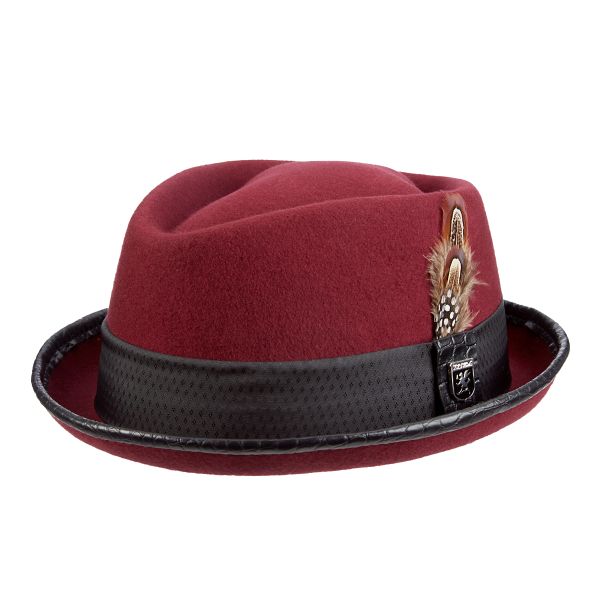 AN ENCOUNTER WITH HAMAN?

If you live in Jerusalem you’ve probably heard of The Jerusalem Messiah Syndrome. Go down Ben Yehuda almost any day in the Spring and Summer and you’ll find a fellow (sometimes more than one) dressed all in white, holding a staff, sporting a long white beard (probably dyed), often wearing a wide-brimmed SherlockS straw hats (that’s another story), and speaking in tongues, mostly English. Watch out. He’s not looking for a handout. He’s looking to convince you that he’s the Messiah.

Well, it’s a few weeks before Purim, and I just got the Syndrome shock of my retail life.

I’m feeling pretty good about myself, having just sold a Stetson Stratoliner SE to a customer who passed by and noticed it in the window. He loved the look, the stylish finish. The fact that it was a deep plush blue – exactly the color he needed for his daughter’s wedding – meant it sold itself.

As I put another Stratoliner SE in the window, an elderly fellow walks by, dressed all in black, sporting a long black beard, braided black hair and scary black bushy eyebrows, holding what I can only describe as a scepter. He stops to stare at the hats in the window. Somehow I know that if he comes in I’m in for a nerve-wracking end-of-day experience.

“Please walk past,” I say to myself, as he enters.

“How can I help you?” I ask, resigned. “I presume you’re looking for something in black?” I offer, without a touch of humor.

“I need a red hat,” he commands. I know this reads like a request but it sounds to me like a command. I obediently bring him a top-of-the-line red Bailey Tino.

He shakes his head as his braids whip past my nose, and points. In the window, on one of the dummy heads, sits a bright red Stacey Adams flat top hat with a 3-sided crown. Without hesitation, I dutifully get the hat and bring it back to him.

As he tries it on, I say, “Are you looking for something for Purim? We have high hats direct from England in four different colors, and of course our Purim standby, the deerstalker Sherlock Holmes hat,” I add, touching the one on my head.

He says nothing. Just puts on this small hat, looks himself straight at the mirror, waiting, as though he expects his reflection to respond.

“This is the one. With this one I can finish what you started,” he says, pinning me with his glare and, at the same time, handing me a fist full of money.

He turns and walks out.

I look down at the money. Rials. 10,000 Iranian Rials. Excited, I quickly check my cellphone to see how much they’re worth.  1 shekel! I can’t believe I just sold a quality Stacey Adams hat for 1 shekel.

Two days later I’m in the Jerusalem Mall, wearing my favorite Kangol Player hat, looking for costumes for a couple of my grandchildren. Out of the corner of my eye, I spy a dummy wearing a costume that’s familiar, one I’ve been trying to forget. All black, with beard and bushy eyebrows, 3-cornered red hat, holding a scepter in one hand and a handful of Rials in the other.

I may be wearing a Player hat, but  I can’t shake the feeling…I’ve been played!